Never Leave Your Bugs at Home 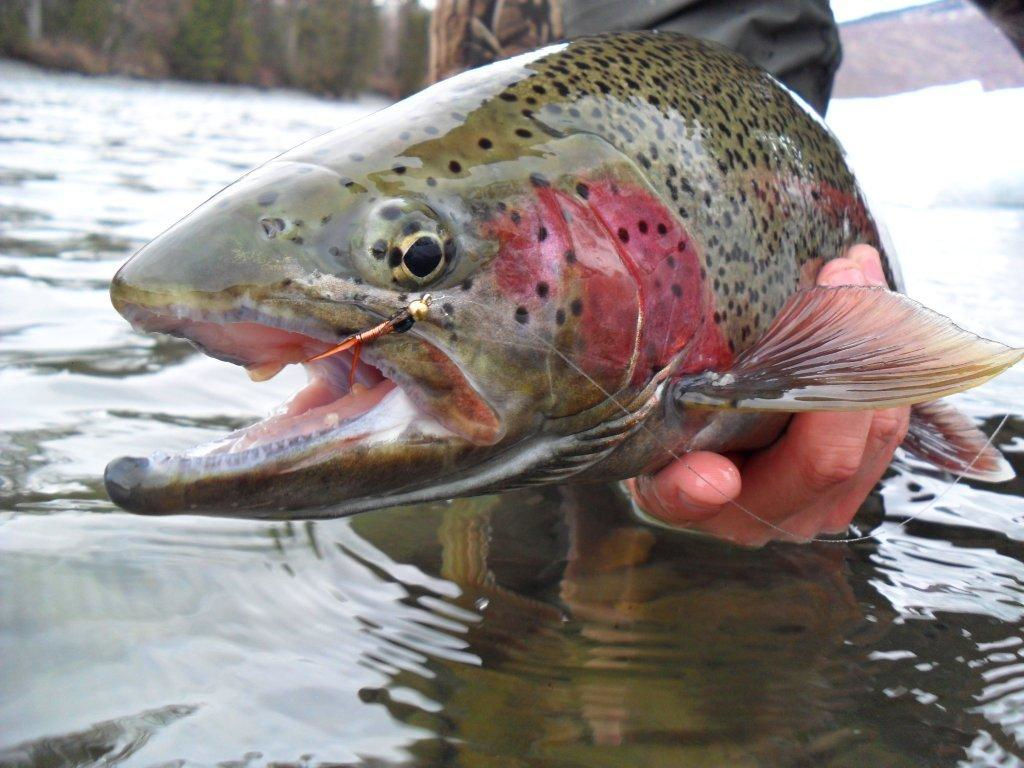 Never Leave Your Bugs at Home

On a recent fishing trip to the middle Kenai River, I was reminded of a lesson I learned many years ago.  This lesson though, is one that most Alaskan anglers have yet to learn for themselves.  Don’t ever leave your bugs at home!

Alaska has a healthy reputation for being a bead and flesh fishery when it comes to trout, and for good reason.  One of the main reasons Alaskan trout grow to the ridiculous proportions that they do has very much to do with the all-you-can-eat protein buffet they receive every year in the form of salmon eggs and salmon flesh littering the river.  This food source is available for a good portion of the year as the different species and runs of salmon cycle through the river systems, leaving behind their contribution to the circle of life.  Sockeye and king salmon are spawning as early as June, and some river systems see live silver salmon all the way through the winter and even into the early spring months of March & April, so while the quantity is constantly changing, there is almost always at least some form of salmon protein available in the system.

Although eggs and flesh make-up a large part of a trout’s diet throughout the seasons, let’s not forget that Alaskan trout are wild animals.  Almost every wild animal I know about is an opportunistic feeder, with few exceptions.  Their instincts tell them that if an easy meal presents itself, they better go ahead and take advantage of that meal because they never know when the next meal might come along.  Trout are no exception to this, and natural selection has provided them with the ability to feed on a wide variety of food sources including:  young salmon, smaller trout, sculpin, mice, lamprey, a wide variety of insects, and the aforementioned salmon parts.

As you may know, the vast majority of the trout caught on the Kenai get released nowadays, but having fished this river for over 30 years, I’ve had quite a few opportunities to clean trout for dinner.  Being a weirdo-scientist at heart, I always take that opportunity to inspect the stomach contents.  I would occasionally be surprised what I found in there, but it was usually an assortment of the food items you would expect (salmon eggs, flesh, small fish, etc).  However, there’s only one food item that I found within every single gut that I’ve ever inspected, without exception… you guessed it, bugs.

Bugs make up a very significant portion of a trout’s diet, even in Alaska.  Whether or not there are any salmon spawning, alevin hatching, smolt migrating, or carcasses available for consumption, there are always bugs around in some form or fashion – always.  But finding some bugs inside a trout’s stomach and actually catching trout on patterns that resemble bugs are two completely different things.

One day on the upper Kenai almost 20 years ago, I was drifting down the river with a good friend of mine on a warm day in August.  The sockeye hadn’t quite started spawning yet, and the bead bite was relatively slow.  The masses of filleted sockeye carcasses were still around, but the trout didn’t seem to be real interested in flesh flies at the time either.  All the other anglers we talked to seemed to be having similar luck, catching an occasional fish but not experiencing the steady action one would normally expect at this stage in the season.  I had recently hiked into a mountain lake with a pocket full of nymphs to catch grayling, and it just so happened that I still had that same pocket full of nymphs in my jacket, so I half-jokingly tied one onto the end of my line.  “What could it hurt,” I thought to myself.  You can probably guess what happened next… I started catching trout.  I started catching lots of trout!  Maybe the trout had seen so many egg patterns that they stopped biting them?  Maybe the bugs were being especially active and available as a food source?  Maybe the moon and the sun were at just the right angle as the barometric pressure was falling?  I honestly don’t know.  But I know it worked.

Since that buggy day on the upper Kenai year ago, anytime the trout bite is unexpectedly slow I try to remember to throw a nymph pattern on the end of my line.  Results can be mixed, ranging from no more action at all to an all-out fish catching clinic, but I know for sure that it never hurts to give it a try.

Some patterns that commonly get an Alaskan trout’s attention include:  Pheasant Tail Nymphs, Prince Nymphs, Kauffman’s Stonefly, Copper John’s, and Hare’s Ear Nymphs.  Don’t be afraid to try a dry fly too, and for that top water bite you can pretty much get away with just having a few Elk Hair Caddis in your box.  The commonality among all these patterns is that they are attractor patterns, not necessarily designed to imitate any one specific species of bug.  And you can probably leave the size 18 and 20 flies at home; Alaskan trout aren’t quite as picky when it comes to their bug selection, so flies in the size 10-12 range are usually a good choice.

There are many ways to fish bugs such as your standard nymph rig, a tandem nymph rig (when allowed by regulations), and a dry fly with dropper.  But one thing I’ve found that can work wonders in Alaskan rivers is replacing the hook below your bead with a nymph.  Don’t ask me to explain why, but sometimes the combination of a bead pegged above a nymph is exactly what these opportunistic trout are after.

Next time you’re headed out trout fishing in Alaska be sure to bring a good assortment of egg and flesh imitations, but also throw some bugs in your fly box because you never know, you just might be glad you did.